The history of Macedonian migration to Australia begins in the late 19th century, with the first major wave occurring in the years after World War I. The Balkan region was unstable and employment prospects were poor so young men left their families to find work on the other side of the world. By the early 1920s there were a significant number of Macedonian men working in the steel industry in Lithgow, NSW. When the industry relocated to Port Kembla in the Illawarra in 1928, the Macedonian workers came with it. Riste Belcev (second from left, back row), from Capari, Bitola, on the day of his departure for Australia in 1938. He was one of the many men who left their villages to work in the Illawarra steel industry. Photo courtesy the Belcev family.


Riste (Chris) Sazdanov from the village of Capari, near Bitola, is believed to be the first Macedonian to settle in the region. He came to Australia in 1924 and after working odd jobs, purchased his own truck. He was hired by Hoskins Steel Works, now BHP, and built his own house on Flinders Street, Port Kembla, which served as a boarding house, café and gambling joint for the Macedonian men at the steelworks. Trajanka Sazdanova, her son Alek and husband Riste (centre back row) with their boarders and other steel workers at their house on Flinders St, Port Kembla, 1930s. Photo courtesy Trajanka Mangovska.


He was joined in 1937 by his wife Trajanka, and son Nikola. A second son, Alek, was born in Australia in 1938. According to Alek, his mother had brought her traditional costume and apron with her to Australia, making hers the first Macedonian apron in the Illawarra. Trajanka was the only Macedonian woman in the area at this time and in 1947 she moved with her children to Newcastle, where there were six other Macedonian families.

In the late 1940s there was another wave of migration when many Macedonians who had lost their homes in the Greek Civil War sought refuge in Australia. These included displaced children who were brought to Australia to be reunited with family members under a scheme negotiated with the then USSR and other eastern European countries. Most joined relatives primarily in Sydney, Melbourne and Perth.

At about the same time many Macedonians from the Bitola, Resen, Ohrid and Struga regions, faced with the postwar communist regime, left for Australia to work in the Illawarra steel industry. Although again they were primarily men, some women made the journey to join their husbands who had been in the region prior to the war.

In the late 1960s and early ’70s family reunion programs saw the largest number of Macedonian migrants coming to the Illawarra. Over time, entire villages migrated and once in Australia, tended to concentrate in particular suburbs, often in industrial areas. Macedonians from Ohrid generallly settled in the suburbs of Cringila and Coniston, while those from Bitola concentrated in Port Kembla and Warrawong. Communities maintained their customs and traditions by organising and running functions, special religious days and picnics. It was here that the ladies would wear their national costumes with their colourful aprons which distinguished them from other Balkan regions.

By the early 1980s, with the support of the NSW Ethnic Affairs Commission, seven traditional dancing groups were formed with each group having between 40 and 100 dancers and two or three costumes. Although most of the costumes were made in Australia from synthetic material, some mothers passed on the costumes they had brought with them, or sent for the original handmade costumes which had been left behind. They then gave the aprons to their daughters or granddaughters for dancing and these later became heirlooms.

As the dancing groups folded, the costumes and aprons were stowed away, only coming out for special functions or cultural events organised by the Macedonian Welfare Association Inc. or on special days organised by some of the remaining Macedonian cultural organisations. Twenty-five years later, the Macedonian Welfare Association is now well established and among other activities, runs regular day care groups for seniors in Port Kembla and produces a quarterly magazine, KOMPAS. Ivanka Radiceska wearing traditional costume. Ivanka migrated from the village of Meseista in 1985 and now lives in Cringila, near Port Kembla. Photo by Mendo Trajcevski.

In 2006, noted heritage practitioner and admirer of aprons, Meredith Walker, brought to our attention that aprons were regularly featured in old photographs in each edition of KOMPAS. Up until that point, we were not aware of any research into the meaning and purpose of the aprons and thus began a steep learning curve.

We approached a number of organisations for resources, including John Petersen, Manager of the NSW Migration Heritage Centre, who offered us invaluable advice and financial support. The intention was to focus on ten aprons; however, once we invited interest from Illawarra’s Macedonian community, we were inundated with more aprons from elderly people or their daughters than anticipated.

This is the first research of its kind in the Illawarra, if not in Australia and further beyond, and I hope it may lead to apron research for Australia’s many other cultural groups.

Ties with tradition: Macedonian apron designs will provide a lasting record of the beauty and intricacy of the aprons and at the same time instil in the younger Macedonian generation and others an appreciation of their value and significance. For this I would like to thank Meredith Walker, the NSW Migration Heritage Centre and the Powerhouse Museum, in particular John Petersen.


http://www.migrationheritage.nsw.gov.au/exhibitions/tieswithtradition/essays/macedonian-migration-to-illawarra.shtml
Posted by Tanya at 10:09 PM No comments: 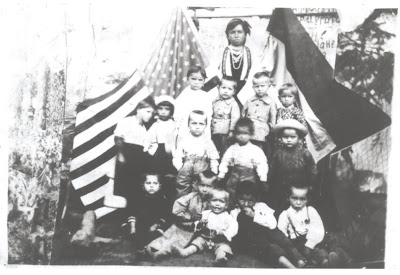 This photo was taken around 1925. The flag in the background of this photograph was brought back to Capari, from the USA, by a pechalbar (migrant worker).

Special thanks to Nick Bozinoski, from Australia, for sending us this photo! :)